The Appeal of Donald Trump 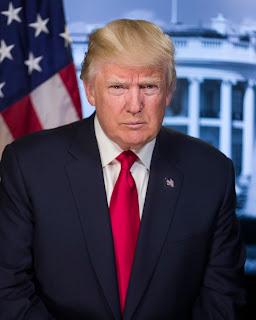 Donald Trump's rise is extraordinary and unprecedented. He beat out all Republican opponents as well as the Democrats’ strongest candidate. He ran a fierce campaign through rallies, interviews, speeches, press conferences, and social media. He said terrible things which only made him more popular.

Media made him out to be a total monster… yet millions of Americans voted for him to be our next president despite having no experience in governing. So what’s his appeal? I noticed a few things about his speaking style that struck me as a speech teacher. I will intentionally avoid getting into all of the controversies and the more offensive aspects of his campaign.

In short, Donald Trump’s main persuasive appeal is of strength. I really think that sealed the deal for him. He is, physically, a large individual. The Washington Post recounted his appearance on Dr. Oz’s show where he was said to be 6 foot 3 inches tall and 236 pounds. That’s a big guy.

Whenever we see him on TV, he's the biggest person in the room or close to it. The debates highlighted his size in contrast everyone else. He’s nearly a full foot taller than Hillary Clinton and 100 pounds heavier. Humans see this and it unconsciously affects how we view the candidates.

He also has a big persona. He’s been an infamous cultural icon for decades. He’s known as a wealthy businessman who lives extravagantly. He was made more famous than ever through his show, The Apprentice. The most memorable part of the show was when he ceremoniously fired people from his pedestal with the catch phrase, “you’re fired”. He had this powerful reputation long before he began campaigning for president.

He speaks powerfully. He may not speak in full sentences, or with good grammar. But he speaks authoritatively. He sounds decisive. This is true despite his vacillating positions on many issues. He has a gritty, low and strong voice.

He is hyper-masculine. He strikes first and he strikes back with 10x the force. His policies on issues like immigration and foreign policy are strict and harsh. He’s widely known as a bully for the way he taunted opponents. He even bragged about the size of a certain anatomical part in response to insinuations about the size of his hands. Some may have cringed watching this; but the audience cheered. He affirmed his manhood throughout his campaign.

We live in an era of great fear and disillusionment. America, via the electoral college votes, chose a large and powerful man to be the next president. I think this event boils down to a nation seeking strength in a time of perceived weakness.

Love him or hate him, he won the race. I’m fascinated by all of the articles explaining his ascension to the most powerful office in the world. Some focus on sexism, racism, demographics, politics, economics etc. I'd add that the simple trait of strength, conveyed through non-verbals, was an important component in all of this too.

Body language and vocal tone deeply shape our perceptions. A person who masters these abilities can command great power. I hope, albeit with great caution and skepticism, that Donald Trump can use his powers for good.